Turns out we’re closer to consumer hoverboard technology than we think. Forge Apollo’s digital series Technium highlights all the latest discoveries and inventions in the tech world, recently featuring the Flyboard, an aquatic device that uses water to propel the user high above the surface. The video features the device in action, comparing it side by side to its counterpart as seen in Back to the Future II. 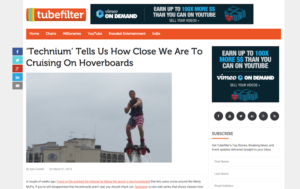 I created a show for Forge Apollo that recently launched on Youtube, Technium, that joined our previous collection of sci-fi short films and fantasy web series Ambient. Future episodes continue to investigate which futuristic inventions are within our grasp, and which ones already exist.

Tubefilter is the curator of online video. We do that in a number of ways. From industry news, to web series reviews, to related events, and one heck of an Awards Show. Read the full article here.